The tour group is guaranteed departure at least 2 people join-in.
You’ll be a part of a small group with maximum 8 people.
This tour is available on every Tuesday, Thusday, and Saturday;
If you want a private tour or travel on other tour dates, please send us a message or an inquiry.

Peter has rich experience of leading English-speaking groups all over China since 2002. Peter had traveled China extensively and the Beijing is his favorite. Previously Peter was working as national tour leader in a British adventure company for 7 years.

Peter is knowledgeable about the Beijing and is happy to share you with the history, culture and other stories. Sometimes he is quiet, however he will answer all your questions if you initiate the topic. Peter also can give you suggestion and advice about traveling other parts of China based on his past leading experience.

8:20 am - 8:30 amMeet at the subway exit A of Qianmen Station (地铁前门站A出口)
Meet at the subway exit A of Qianmen Station (地铁前门站A出口) at 8:30am. Your tour guide will be waiting for you with other tour members, holding a sign with the Forbidden City Ticketslogo on. You can get there by subway or taxi.
Please make sure to arrive punctually as the trip must begin on time. If for some reason you cannot get there by the specified time, please make a call to your tour guide (listed on the confirmation letter that we will send you the day before your departure) and your tour guide will try his or her best to help you.
8:30 am - 9:15 amVisit the Tian'anmen Square

You will visit the Tian’anmen Square – the largest urban square in the world where you can see the famous portrait of Chairman Mao hanging on the red wall. You can take pictures and walk around at the square. You guide will give you background information about this famous square.

Turn right and enter the Hall of Literary Glory, which functions as the exhibition hall for porcelain at present.

The porcelain exhibition in the Hall of Literary Glory

Back to the Central Axis Way, you will see a grand square in front of the Hall of Supreme Harmony. Your guide’s presentation will answer your questions, like: Where is the throne of the Chinese emperors? How did the emperor have an audience with high-ranking officials? What is the significance of the sundial, bronze turtle statue, stork statue, huge copper vat, etc.

The Hall of Supreme Harmony

Visit the Hall of Complete Harmony and Hall of Preserving Harmony, which respectively functioned as the place for the emperor to change his costume before grand ceremonies and the venue for the annual imperial exams.

Walk along the white marble balustrate and descend from the main palaces. On the way you will see a high stone slab with a dragon and cloud design. It weighs about 200 tons. Our presenter will enlighten you as to how they were transferred into the Forbidden City.

Walk to the eastern side of the Forbidden City to see the Clock Exhibition Hall and famous Nine Dragon Screen.

Walk along the red palace wall to the Palace of Prolonging Happiness to view remains of the most ingenious building in the Forbidden City — the Crystal Palace.

Cross the Central Axis Way to view the Hall of Heavenly Purity and the Hall of Earthly Tranquility, which used to be respectively the audience hall for high ranking officials and the venue for emperors’ wedding ceremonies.

Leaving the Inner Palace Courtyard, stroll along the side of the Western Chamber. Your next stop is the Hall of Mental Cultivation, where you can see the screen that was between the throne of “the Little Emperor” and his mother — “the Dragon Lady”. It is where the renowned historical events known as “Power Behind the Screen” took place. Of course your guide will be giving elucidation, showing pictures and bringing back to clarity the life of those historical figures for you.

Visit the Palace of Eternal Spring, once the residence of the most influential political figure in late Qing Dynasty — the Dragon Lady, Empress Dowager Cixi. Though many experts criticized her about utilizing Chinese navy funding for building her own garden, which caused defeat in the war with Japan in 1898, she is also credited in the history of China as the benefactor of the first railway, first telegraph, first coalmine, and even first stock share.

Lastly you will be shown to the imperial garden and view the artificial rockery, surrounded by peonies and trees in beautiful shapes. Some of them looks like animals of the Chinese zodiac. The last palace you will see is called ‘Feast Pavilion’. In the Qing Dynasty the annual selection of the emperor’s concubines happened there, and their story and that of the eunuchs will be presented.

Finally you will come to Spiritual Valor Gate (神武门) which is the north gate of the Forbidden City.

11:45 am - 12:30 amVisit Jingshan Park
Later on you will visit Jingshan Park which is located in front of the Forbidden City. It is said to be the best position to get a panoramic view of the Forbidden City. Definitely not to be missed, Jingshan Park is located on the central axis of Beijing and has many historic buildings symmetrically located on both sides. You will see the Drum and Bell Tower to the north while the Forbidden City and Tian’anmen Square can be seen to the south.
Your tour will end at Jingshan Park. After the tour, you can take the subway or a taxi back to your hotel. Your guide will show you the best ways to get back to your hotel or other places you are interested in visiting.
Included
Not Included
Cancellation Policy
Included
Admission to the Forbidden City and Jingshan Park.
English-speaking expert local guide.
Not Included
Hotel pick-up and drop-off.
Lunch
Gratuities to your tour guide & driver (usually CNY 50 - 100 per person). It is not compulsory but would be a great encouragement for them.
Cancellation Policy
If we are not able to implement the contract due to war, flood, typhoon, fire, strikes, storm, earthquake, or any other condition we are not able to foresee and avoid, we will inform customers at the first possible opportunity and offer the best possible solutions, and the final bill shall be settled based on the service we actually provide.
Up to 7 days before departure: 100% refund of all money paid, excluding penalties charged by hotels, railways, airlines, and PayPal, if applicable. All penalties will be itemized.
From 3 to 7 days before departure: 90% refund, excluding penalties charged by hotels, railways, airlines, and PayPal, if applicable. All penalties will be itemized.
Within 3 days before departure: no refund.
After the trip has commenced, we are unable to refund any amount for cancelled services due to non-participation, early departure, late arrival, or missed days on tours.
For groups of more than 10 people: The terms for cancellation may vary from case to case. Please ask your travel advisor regarding the cancellation policy for your group.
Emergency contact: 0086-15538191943 (24-7 customer service)

We have Happy Customers 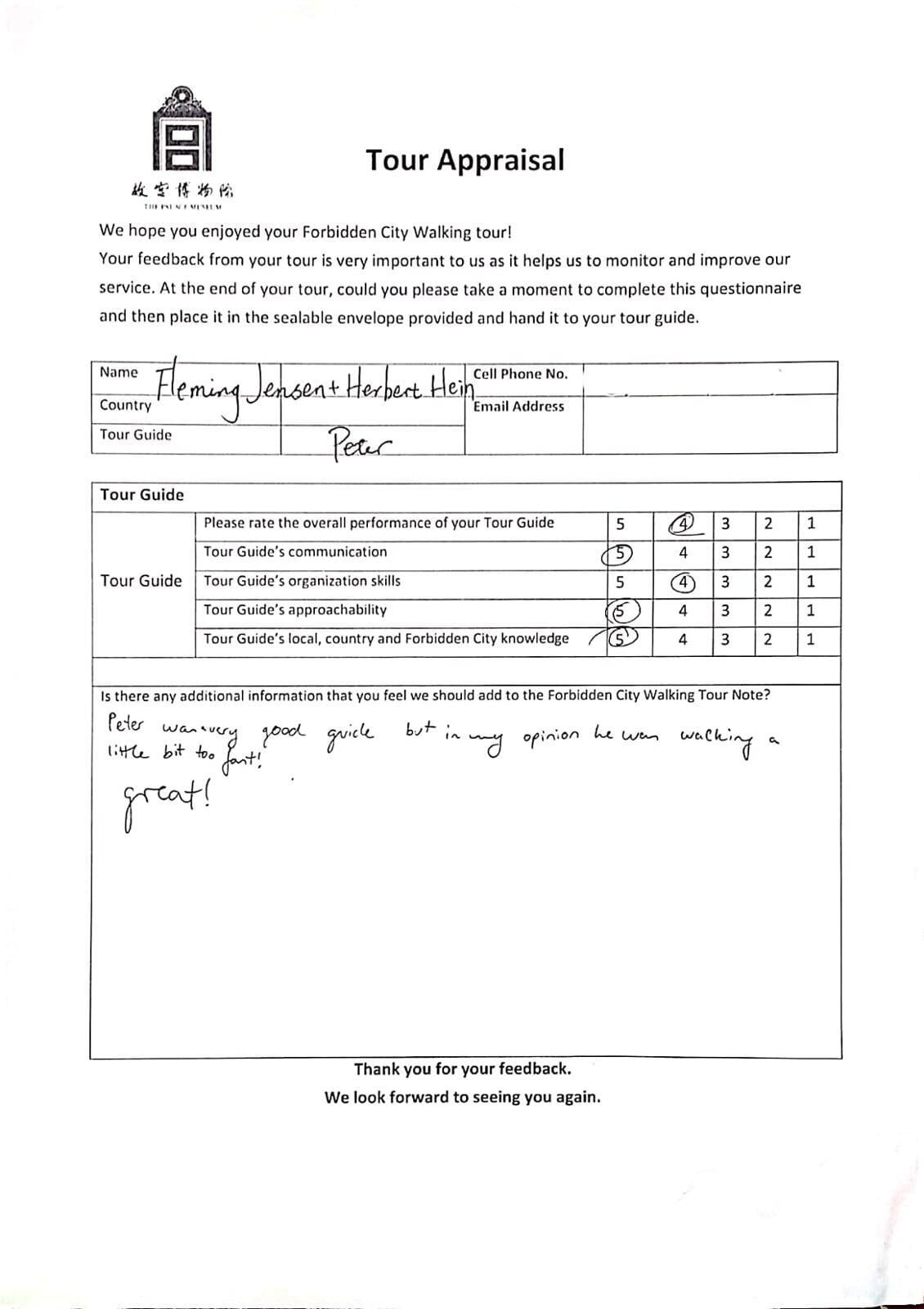 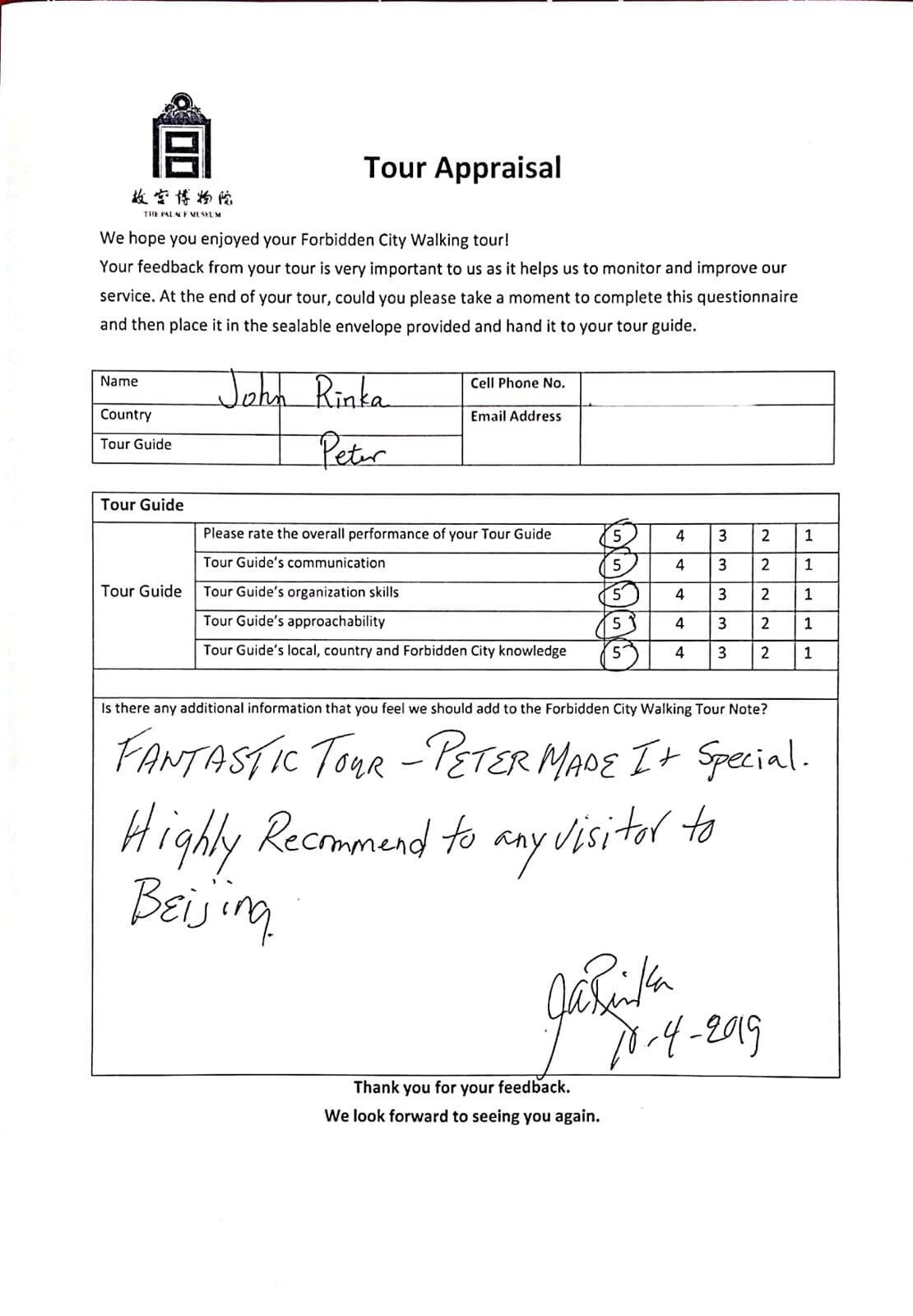 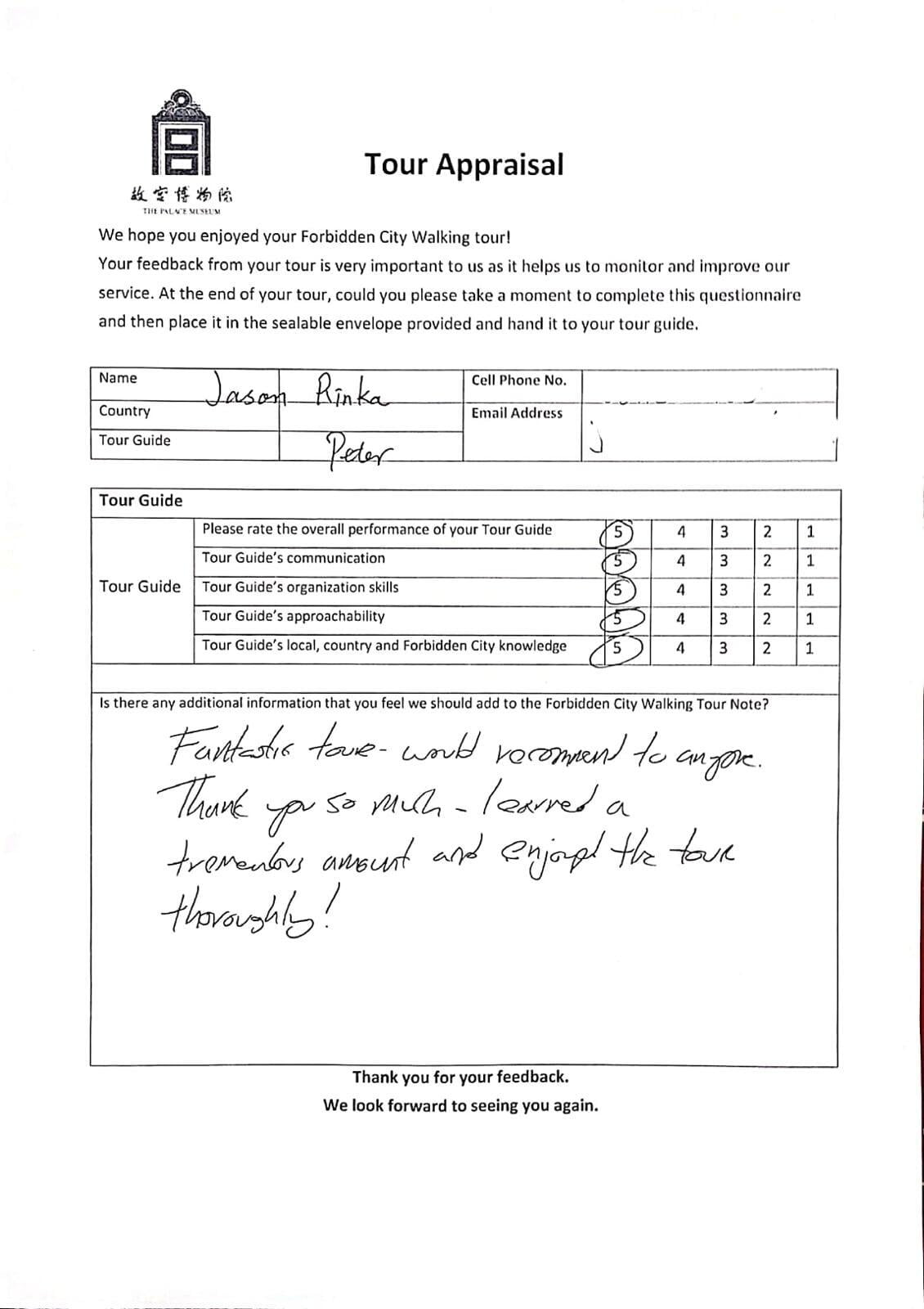 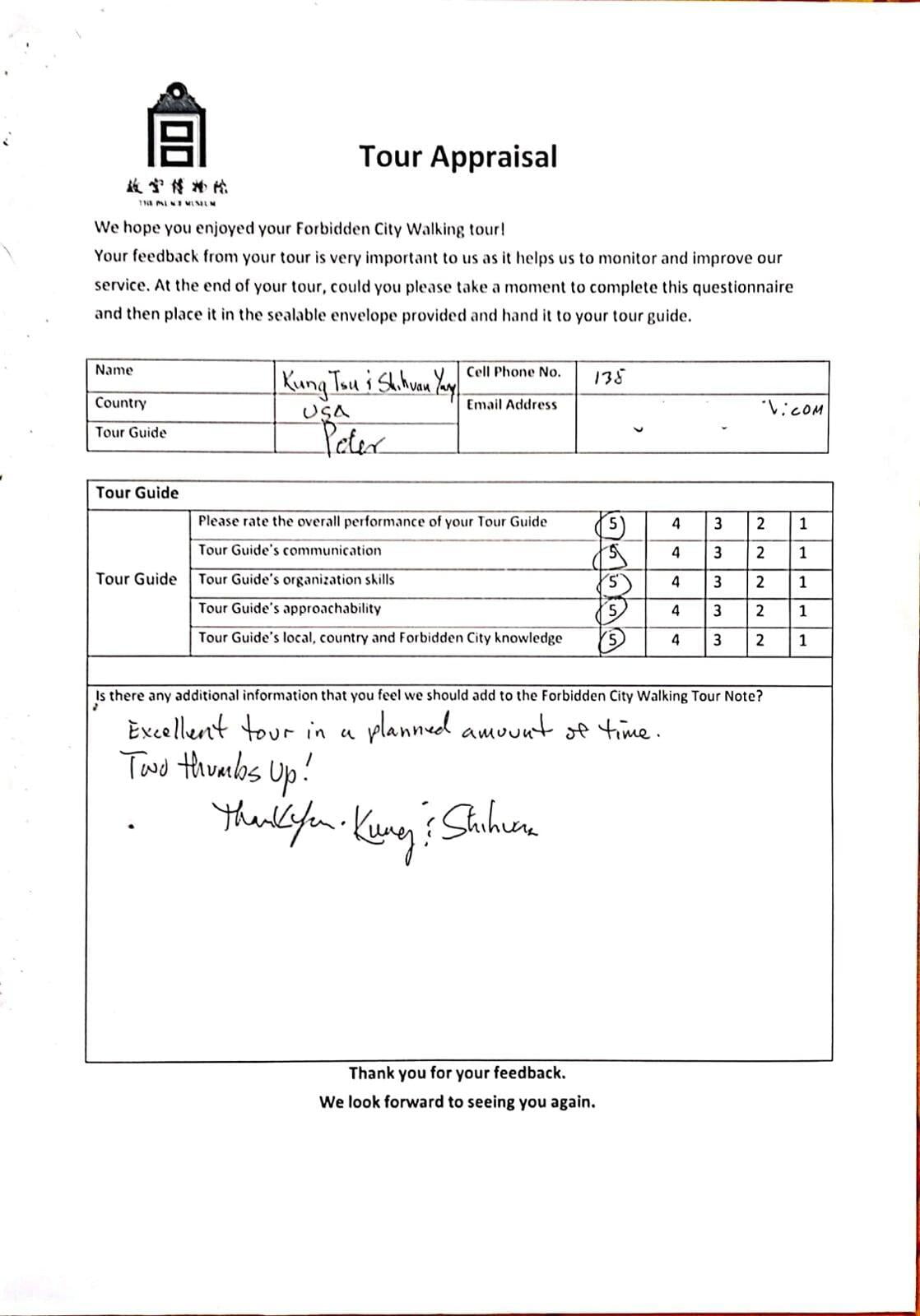 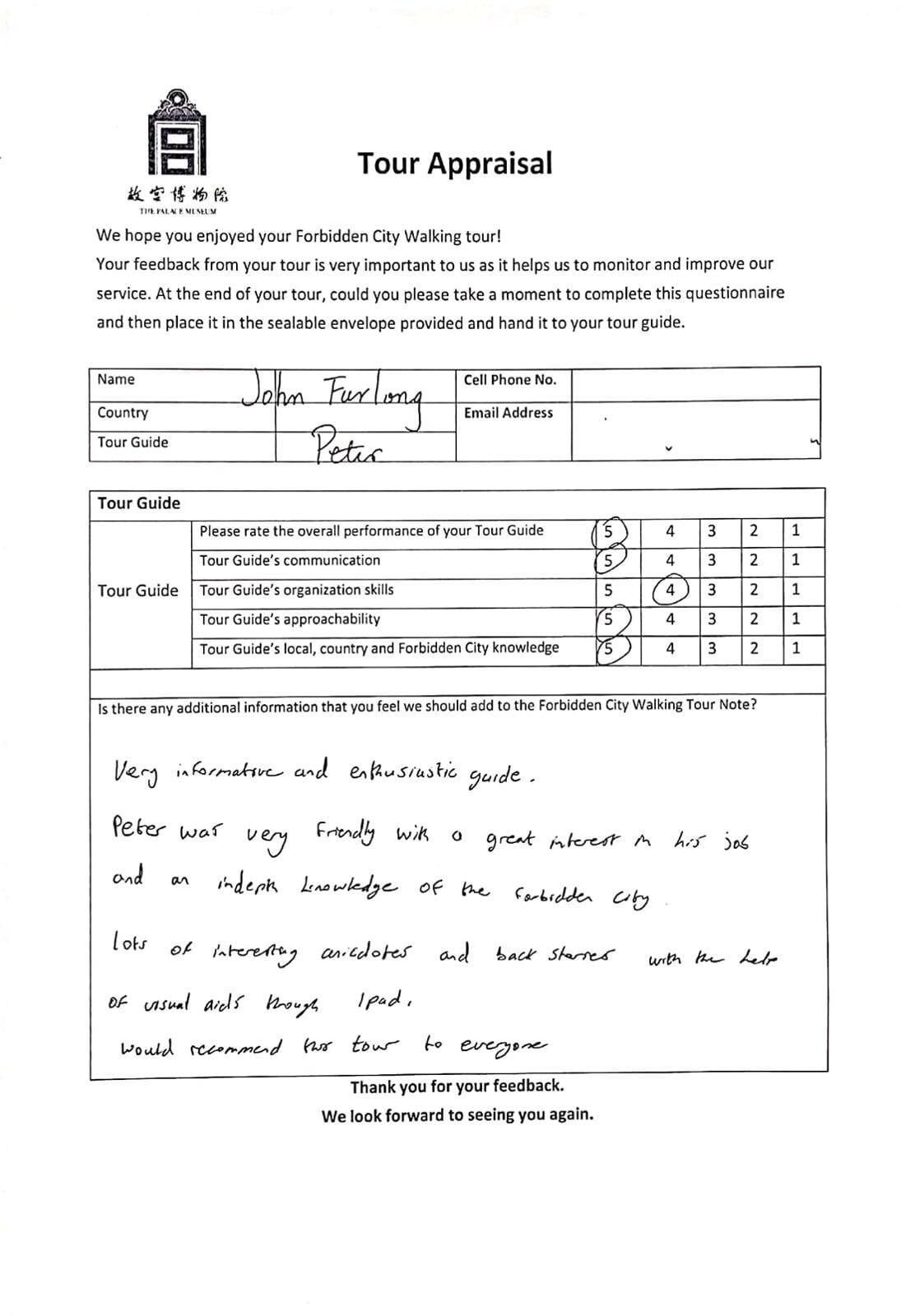 For 48-hours last minute booking please feel free to call us to check the availability.

Reach us via WeChat